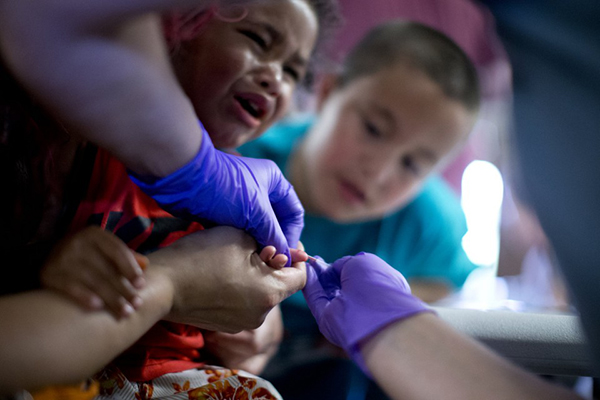 In the past three years, 188 children out of 15,000 people screened have come to Multnomah County’s health department with enough lead in their blood to cause alarm. Not a single one got it from drinking water.

It’s not clear where they got it. But experts say it’s not likely from water.

Most children in Multnomah County get lead in their bloodstream the same way most of the nation does — through the air. More than half of the county’s lead investigations point to lead paint or inhaled dust as the culprit. The next biggest group – nearly 15 percent – are people who come from countries where they were exposed to high levels of lead.

As worrisome as lead in schools’ water might be —  the federal government says that no level of lead in a child’s blood is safe — experts say it’s far from a top contributor to lead poisoning.

Grandma’s prized Mexican pottery is more likely to be the culprit than water.

Where does lead in our water come from?
Portland’s water is effectively lead free when it leaves the Bull Run watershed. But when it arrives in some high-risk homes and buildings, it can contain dangerously high lead levels.
That’s because Portland’s water is corrosive and can leach lead from plumbing. High-risk homes are considered those built between 1970 and 1985 that have copper pipes with lead solder connections. Lead is also associated with brass plumbing fixtures.
Portland Public Schools told The Oregonian/OregonLive this week that officials don’t know the cause of high lead levels in schools. They said it “could” be lead solder, pipes or faucets. But they declined to identify what is believed to be the main source.
Officials last conducted district-wide lead testing in 2001. Officials also detected high lead in the early 1990s. They subsequently implemented a flushing program to ensure students wouldn’t consume water that stood in pipes overnight.
Asked whether Portland Public Schools had failed to perform analysis about the underlying source of lead in recent decades, Courtney Westling, a spokeswoman, wrote: “These are questions we have as well.” She pointed to an outside investigation that will “get answers” that will be provided publicly.
Asked what role the city’s water plays in the release of lead, she wrote: “We can’t comment on the city’s water quality.”
Andy Fridley, the district’s senior manager for environmental health and safety, was more definitive about lead sources when responding to a parent in February.
“The contaminates (lead and copper), if present, come from the system piping,” wrote Fridley, who is now on paid leave pending a district investigation.
— Brad Schmidt

That is not to say that exposure from water should be ignored. Howard Mielke, a research professor at Tulane University, said children’s sensitivity to lead makes them the “canary in the coal mine” for widespread exposure. He said children have developed learning disabilities from only 2 micrograms per deciliter of lead in their blood — the federal acceptable level is 5.

Lead poisoning can cause a wide range of health issues, including behavioral problems, learning disabilities, seizures and coma.

But Mielke said water is not usually the worst offender. Often, it’s when people try to remove lead paint. Lead paint in old houses might chip and peel – or be sanded off — releasing lead particles that are then inhaled. “There is so much evidence on lead based paint that we forget, when it is disturbed, that is when it is a problem,” Mielke said.

Yet, emails obtained by The Oregonian/OregonLive on Wednesday showed administrators and officials ignored — and sometimes mocked — concerns that students were still using these water sources.

But even if school water was spiking the lead levels in children’s bodies, pinpointing a school as the source will be tricky. County spokeswoman Julie Sullivan-Springhetti said drinking water is one of the hardest sources of lead to track.

“You don’t know where they’re drinking, how often they’re drinking,” Sullivan-Springhetti said. “You might have assumptions about where people get their water during the day. Not even those of us who are aware can for sure say where I drank water today. You’re at a restaurant, you’re at mom’s kitchen sink, you live between two different parents…”

And when lead is found in water, investigators must determine whether it’s from lead solder in pipes, the fixtures themselves or some other source.

Still, children shouldn’t be exposed to any amount of lead in water, and if it’s present, it should be fixed, Sullivan-Springhetti said.

“We need to assure that the water in buildings for public consumption meets” federal standards, she said.

The county conducted blood screenings for students and pregnant staff members over two days at Rose City Park School and Creston Elementary and found two children with elevated lead in their blood.

The tests were for small amounts of blood and can produce false positives. It’s up to parents to take those children to a doctor for follow-up tests that will determine whether they truly have too much lead in their blood. Then Multnomah County will investigate where the lead came from.

Sullivan-Springhetti said the county will report the results of the investigation when it is over.

There are many ways for lead to enter the bloodstream. Most often, it is inhaled. Tiny particles disperse from flaking lead paint, or drift up from the soil during the dry months of the year.

When lead is ingested, it usually dissolves in stomach acid. Adults usually absorb only about 1 percent of the lead that enters their bodies, storing it in bones and teeth. The rest passes out as waste. But for children, only 34 percent passes as waste, according to the U.S. Center for Disease Control and Prevention.

In the days before and after The Oregonian/OregonLive broke the news about Portland Public Schools‘ lead problem, parents were outraged at the district’s delay in taking action.

“As a public health professional, I really must say that this apology is much too little and much too late. The lack of urgency on PPS’ part is appalling,” one parent wrote in an email obtained by The Oregonian/OregonLive. “The cognitive health effects of lead for young children is well documented; best practices are well documented.”