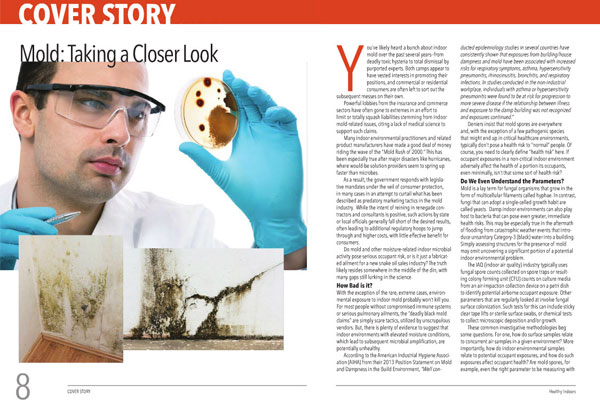 Mold cover story from the May 2016 issue of Healthy Indoors Magazine.

You’ve likely heard a bunch about indoor mold over the past several years–from deadly toxic hysteria to total dismissal by purported experts. Both camps appear to have vested interests in promoting their positions, and commercial or residential consumers are often left to sort out the subsequent messes on their own.

Powerful lobbies from the insurance and commerce sectors have often gone to extremes in an effort to limit or totally squash liabilities stemming from indoor mold-related issues, citing a lack of medical science to support such claims.

Many indoor environmental practitioners and related product manufacturers have made a good deal of money riding the wave of the “Mold Rush of 2000.” This has been especially true after major disasters like hurricanes, where would-be solution providers seem to spring up faster than microbes.

As a result, the government responds with legislative mandates under the veil of consumer protection, in many cases in an attempt to curtail what has been described as predatory marketing tactics in the mold industry.  While the intent of reining in renegade contractors and consultants is positive, such actions by state or local officials generally fall short of the desired results, often leading to additional regulatory hoops to jump through and higher costs, with little effective benefit for consumers.

Do mold and other moisture-related indoor microbial activity pose serious occupant risk, or is it just a fabricated ailment for a new snake oil sales industry? The truth likely resides somewhere in the middle of the din, with many gaps still lurking in the science.