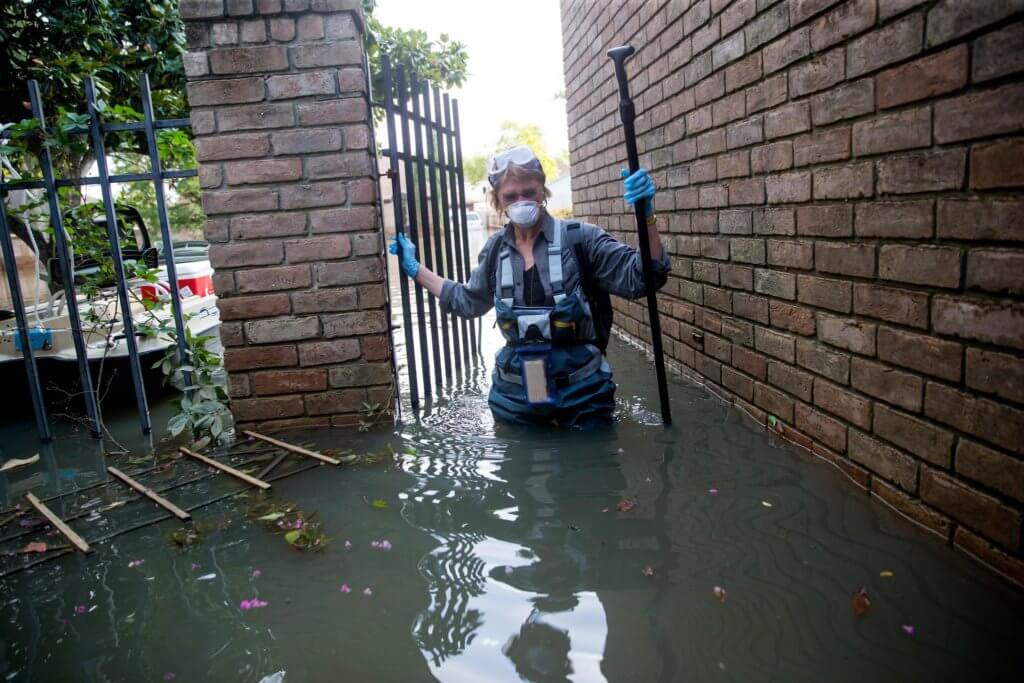 Dr. Winifred Hamilton, director of the Environmental Health Service at the Baylor College of Medicine, collected water samples for testing in a flooded Houston neighborhood on Sept. 5.   Credit Eric Thayer for The New York Times


HOUSTON — Floodwaters in two Houston neighborhoods have been contaminated with bacteria and toxins that can make people sick, testing organized by The New York Times has found. Residents will need to take precautions to return safely to their homes, public health experts said.

It is not clear how far the toxic waters have spread. But Fire Chief Samuel Peña of Houston said over the weekend that there had been breaches at numerous waste treatment plants. The Environmental Protection Agency said on Monday that 40 of 1,219 such plants in the area were not working.

The results of The Times’s testing were troubling. Water flowing down Briarhills Parkway in the Houston Energy Corridor contained Escherichia coli, a measure of fecal contamination, at a level more than four times that considered safe.

In the Clayton Homes public housing development downtown, along the Buffalo Bayou, scientists found what they considered astonishingly high levels of E. coli in standing water in one family’s living room — levels 135 times those considered safe — as well as elevated levels of lead, arsenic and other heavy metals in sediment from the floodwaters in the kitchen.

“There’s pretty clearly sewage contamination, and it’s more concentrated inside the home than outside the home,” said Lauren Stadler, an assistant professor of civil and environmental engineering at Rice University who participated in The Times’s research.

“It suggests to me that conditions inside the home are more ideal for bacteria to grow and concentrate. It’s warmer and the water has stagnated for days and days. I know some kids were playing in the floodwater outside those places. That’s concerning to me.”

The Associated Press and CNN last week reported high levels of E. coli contamination, but did not specify where the samples were taken.

The E.P.A. and the Texas Commission on Environmental Quality have expressed concern about toxic floodwaters, but have not made public the results of sampling they may have done.

Residents and medical professionals said they are seeing infections that likely resulted from exposure to the dirty floodwaters.

Dr. Beau Briese, an emergency room physician at Houston Methodist Hospital, said he had seen a doubling in the number of cases of cellulitis — reddened skin infections — since the storm. He said it was a more modest increase than he had expected, and that the infections had been successfully treated with antibiotics.

Dr. David Persse, the chief medical officer of Houston, said residents caring for children, the elderly and those with immune disorders should try to keep them out of homes until they have been cleaned.

“Everybody has to consider the floodwater contaminated,” Dr. Persse said. He also warned residents to avoid letting cuts and scrapes come into contact with the floodwaters, which can cause infection.

Brad Greer, 49, developed two scabby infections on each of his legs where rain boots had irritated his skin. He took antibiotics, but on Saturday, he said, he started feeling lightheaded and weak as he and his brother-in-law tried to move possessions from Mr. Greer’s flooded home.

He went to the emergency room at Houston Methodist, where he was put on an intravenous drip and given another antibiotic prescription. Mr. Greer said swimming pools around his neighborhood are rank.

“All the pools are just giant toilets you’re unable to flush,” he said.

The lab analysis was paid for by The Times. The sampling was conducted by a team from Baylor Medical College and Rice University, working with the Houston health department’s Bureau of Pollution Control and Prevention.

The group, accompanied by Times reporters, took water and sediment samples last week by boat, truck and on foot. The samples were analyzed by A & B Labs, a state-certified service that often works with federal agencies.

The dearth of information about the safety of the water has upset many residents, including Maria Sotolongo, who lives with her husband and three children on Briarhills Parkway, an upscale development in Houston’s West Oaks/Eldridge neighborhood.

“Nobody has told us not to come,” Mrs. Sotolongo said on Sunday, the first day she was able to get back into her house.

Earlier in the week, she had helped The Times’s team reach her home by boat in order to take water and sediment samples on what had been her front lawn.

“It’s a horrific smell and full of gunk,” she said. “We’ve seen fish in parts of the kitchen.”

Mrs. Sotolongo was well outfitted in rubber boots, gloves and a mask. But some families in inundated neighborhoods in west Houston said they had developed staph infections and other health problems after wading through waters released from reservoirs that swamped their homes long after other parts of the city had dried out.

“It scared us to death,” said John Denson, 40, who lives in the Nottingham Forest neighborhood. He had waded through the murky waters with his wife and two sons to try to salvage things from their home.

Mr. Denson said infections had festered on a cut to his hand and small scratches where the waterproof waders his family wore had rubbed skin raw. In addition, Mr. Denson said that his 14-year-old son, who has asthma, started coughing and had difficulty breathing after being inside their home.

Roderick Francis, 47, who has been living with his wife, Kimberly, and four of their children in Clayton Homes, was also unaware of the health risks.

“I know the houses all flooded like mine,” he said. “I didn’t know of any contamination.”

Mrs. Francis said the couple came back to salvage their belongings from the house, but found it too putrid to stay for long. She was troubled by the yellow, green and black mold already appearing on the couch — as well as by the information that testers had found elevated levels of lead and arsenic, which are neurotoxins, in the floodwater.

The family will not go back to live in their house, and will likely move to Dallas.

Winifred Hamilton, director of the Environmental Health Service at Baylor College of Medicine and a member of the testing group, said she is especially worried about exposure to mold among people who are moving back or who bring along their children as they try to clean and repair their houses.

“I’d be wearing a mask with a filter,’’ she said, “and goggles and gloves, with rubber boots. I would change my clothes immediately after leaving the house, and put them in the wash with nothing else.”

“Mold is taking off all over the city,” Ms. Hamilton added. “People with allergies or asthma are particularly sensitive to it. If people have bad headaches, respiratory problems, swelling of a limb or a bad rash, go see a doctor right away. Don’t assume it will go away on its own.’’

Ms. Hamilton also encouraged people to keep an eye on their kids.

“We have a lot of what looks like sand, like something you might want to make a castle of,” she said. “But this is not clean sand, this is sludge sediment.”