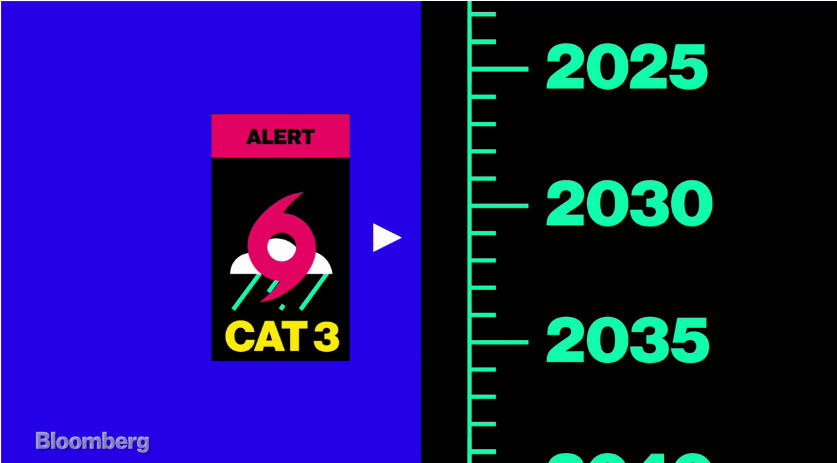 The Coming Storm of Climate Change

The good news is that, for now, experts agree a Cat 5-sized deluge appears to be a meteorological impossibility in the U.S. Northeast, given today’s sea temperatures and weather patterns.

The bad news: A storm doesn’t need to pack the wallop of a Harvey or an Irma to knock out the region. Superstorm Sandy, whose wind speed was a relatively tame 80 miles per hour when it reached New Jersey, did $70 billion of damage in October 2012. Irma made landfall in Puerto Rico at 185 mph.

But if there’s anything we know about climate change, it’s that the boundaries of what’s possible keep shifting. As yet another hurricane, Jose, grinds up the Eastern Seaboard, the black-swan scenarios offer alarming perspective. Imagine what the Great Hurricane of New York might look like:

Winds of 100 mph and 12 inches of rain at high tide push a 16-foot storm surge through the funnel-like entrance of New York Harbor. It wouldn’t take Irma’s killer gusts or Houston’s torrential 50 inches of rain to create a wall of water swamping 500 miles of New York City coastline. The Hudson and East rivers would cascade into Manhattan, overwhelming subways, sewers and roads. Corrosive seawater would fill the aging Lincoln and Holland tunnels to New Jersey, as well as the vulnerable railway tubes beneath the Hudson.

Crazy? Climate change means meteorologists and emergency managers must now consider scenarios they never confronted before. That’s especially true given the rising sea. The water level around New York is 1.1 feet higher today than in 1900 and could increase as much as 2 feet more by 2050.

The potential risks, however remote for now, are enormous for the New York metro area. Sandy, which hit New Jersey as a “post-tropical” storm, flooded almost 90,000 buildings, with 443,000 New Yorkers living in inundated areas. In one part of Staten Island, floodwaters reached 14 feet. Bridges reopened quickly, but close to 2 million people lost power, and cell service for more than 1 million people was reduced or lost. Rebuilding is still going on five years later.

One of the legacies of Sandy was a change in the number of evacuation zones, which the city doubled to six. Roughly 3 million New Yorkers now live in one of those zones.

Megan Pribram, assistant commissioner for planning and preparedness at the city’s Office of Emergency Management, said for a storm on the scale of Harvey, the city would evacuate some low-lying coastal areas.

Harvey-sized rains would be unprecedented in the U.S. Northeast, according to Allan Frei, chairman of the geography department at Hunter College in Manhattan. The most serious flooding in the region was Hurricane Irene in 2011, when 15 or so inches of rain left parts of Vermont underwater.

A Category 3 hurricane — with winds up to 129 mph — hit the New York area in 1938, when “The Long Island Express” caused 18-foot surges. Another Cat 3, Hurricane Hazel, produced wind gusts of 113 mph in Battery Park in 1954, according to Nassau County’s Office of Emergency Management.

Still, Frei said climate change increases the odds that severe rainstorms like the one in Houston could strike New York City. And if New York ever got that much rain, “it would be absolutely devastating.”

“If a storm causes a big storm surge at the same time as it’s raining, and if it hits during high tide, that would be — I can’t even imagine,” Frei said. The sewer system would probably be blocked with debris, diminishing its capacity to drain the city, he said.

Part of that includes the tens of billions of dollars spent since Sandy.

Hospitals and public-housing complexes have been refitted to offer more flood protection at a U.S. Federal Emergency Management Agency expense of more than $10 billion. Utility Consolidated Edison Inc. has spent $1 billion for upgrades to its underground steam, electric and gas infrastructure. A $340 million boardwalk in the Rockaways has been redesigned as a sea wall protecting beaches and homes. The city has planted trees and other vegetation in flood-prone neighborhoods to soak up runoff and ease the burden on the city’s sewer system.

The system could protect about 800 miles of coast from Elizabeth, New Jersey, to the Bronx, and as much as $1 trillion in assets, said Robert Yaro, former executive director of the Regional Plan Association, a policy-research group.

“We in New York are far behind, and among the cities on Earth we have the most to lose,” Yaro said.