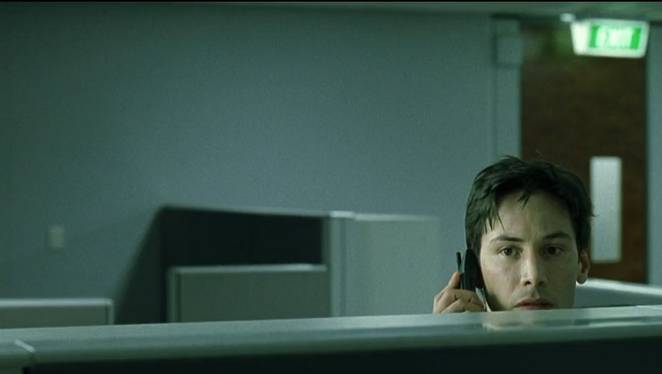 (Photo – Screen capture Neo in his cubicle in the Matrix. The air quality isn’t too good here, either)

That’s where the air quality is so bad that it affects your ability to think properly or effectively.

In his recent Wall Street Journal article Why Office Buildings Should Run Like Spaceships, discussed on TreeHugger in Why an office is not a spaceship, Chris Mims references a 2015 study led by Joseph Allan that looked at the effect of CO2 and VOC concentrations on office workers’ cognitive abilities. Chris concluded from all this that we need more high tech sensors and fancy ventilation technologies to monitor and improve air quality.

© United Technologies/ This office would probably make anyone sick

The researchers put 24 participants into two special office spaces in the Willis H. Carrier Total Indoor Environmental Quality Laboratory for six days. They adjusted the amount of CO2 added to the air to see what difference that made. Researcher Joe Allen told PRI:

We found that when people were moved from an environment with low-carbon dioxide concentrations to a level of about 950 parts per million — a level we find in most indoor spaces — we saw a fifteen percent decrease in cognitive performance scores for the people in that space. And when they moved to an environment with 1400 parts per million, we saw fifty percent lower cognitive performance scores when they were in that environment.

Or as Allison Bailes concludes: “The main takeaway here, though, is that lower CO2 generally helps us do better on tests of cognitive function.” That’s interesting, and no surprise to anyone who has watched Apollo 13; lower CO2 levels are better.

But I think that the other part of the experiment, looking at the VOCs (volatile organic compounds) was far more interesting. The office space was designed and tested to have low VOC materials, so they fixed that by adding stuff through floor diffusers from the mechanical room below – particle board, vinyl mats, adhesives, packing tapes, clean products, and office products, all those things found in normal offices. Joe Allen tells PRI that it’s all the usual suspects, nothing exotic:

We didn’t introduce chemicals into the environment that you don’t typically encounter; we didn’t introduce ventilation rates that are impossible to obtain. The idea was to simulate office environments that can easily be obtained. What’s shocking is that you see this big effect and the effort it takes to reach it wasn’t that much.

Depending on the amounts of VOCs, they classed the offices as conventional green or green+. And it made a huge difference:

Allison is an expert on ventilation but isn’t fixated on it, and concludes:

Over the past few decades, the air in many buildings has gotten worse as we’ve started to make them more airtight. We also put a lot of nasty, offgassing materials in our buildings. The result is that we breathe in more VOCs, more carbon dioxide, more particulate matter. And apparently it makes us dumb. You’ve heard of Sick Building Syndrome, right? Now we can add another one: Dumb Building Syndrome. (Just wait till the lawyers hear about that one!) But we can avoid it with source control: Keep the bad stuff out. We can avoid it with mechanical ventilation. We can avoid it by just being smarter.

I am not personally crazy about calling it Dumb Building Syndrome, writing as I do about simple technologies with articles like In praise of the dumb home, a reaction to the so-called Smart Home, because in a lot of ways, we want the people to be smart, but a dumb building isn’t such a bad idea. Back in the Wall Street Journal, a high tech solution was proposed to fix air quality, “an HVAC system that dynamically responds to both carbon-dioxide levels and levels of airborne particulate matter, pumping in fresh air while filtering out pollutants.”

But it is clear from the study that we have to go back to first principles, that we don’t necessarily need fancy ventilation systems as much as we need design and build our offices with healthy materials that do not produce VOCs in the first place.

And in memory of the late Tom Petty, his cover of Thunderclap Newman’s Something in the Air: