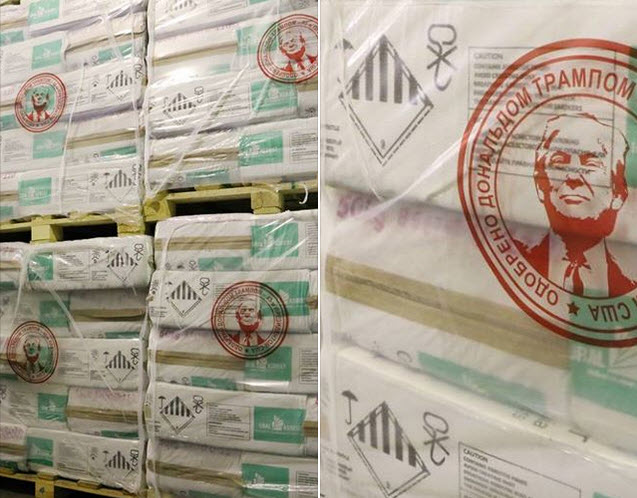 This story was produced and originally published by the Guardian and is reproduced here as part of the Climate Desk collaboration.

Donald Trump’s environmental policies may have caused controversy in the U.S. but the president’s stance has managed to get him a literal stamp of approval from a Russian mining company.

Uralasbest, one of the world’s largest producers and sellers of asbestos, has taken to adorning pallets of its product with a seal of Trump’s face, along with the words “Approved by Donald Trump, 45th president of the United States.” 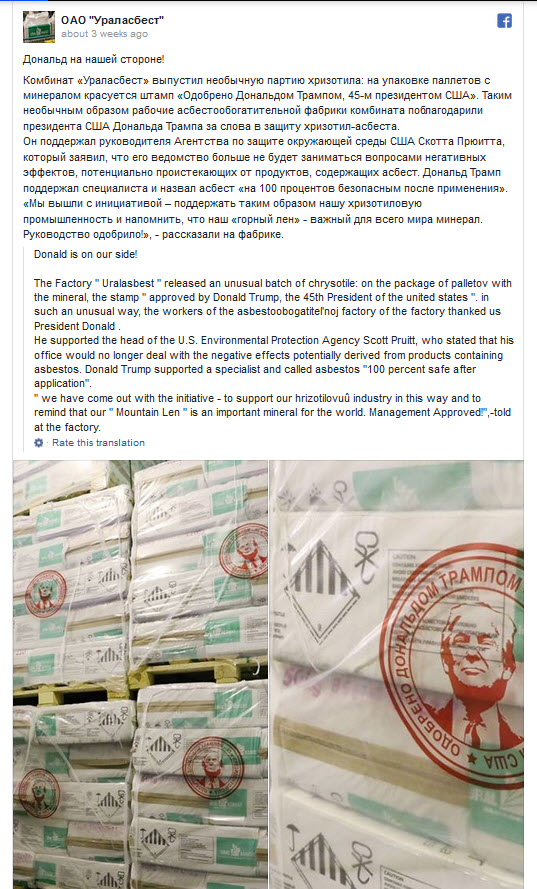 The move follows the U.S. Environmental Protection Agency’s recent decision not to ban new asbestos products outright. The EPA said it would evaluate new uses of asbestos but environmental groups have criticized the agency for not going further by barring them on public health grounds.

In a Facebook post, Uralasbest published pictures of its Trump-adorned chrysotile asbestos, writing: “Donald is on our side!” The post thanks Trump for supporting Scott Pruitt, the recently departed head of the EPA, “who declared that his agency would no longer deal with matters related to side effects potentially caused by asbestos.” It adds that Trump called asbestos “100% safe after application.”

Uralasbest, which is located in the mining city of Asbest in the Ural Mountains, is reported to have close ties to Russian president Vladimir Putin, who Trump will meet for talks in Helsinki next week.

Asbest was once known as the “dying city” due to its high rate of lung cancer and other asbestos-related health problems.

“Vladimir Putin and Russia’s asbestos industry stand to prosper mightily as a result of the Trump administration’s failure to ban asbestos in the U.S.,” said Ken Cook, president of the Environmental Working Group.

“Helping Putin and Russian oligarchs amass fortunes by selling a product that kills thousands each year should never be the role of a US president or the EPA, but this is the Trump administration.”

Asbestos was once widely used in the US for insulation and roofing but is now classed by the federal government as a “known carcinogen” due to evidence that, when disturbed, asbestos fibers can become lodged in the lungs and cause mesothelioma, as well as cancers of the lung, larynx and ovary. According to the Centers for Disease Control and Prevention, around 2,500 Americans die from mesothelioma every year.

Trump, however, has previously voiced his support for asbestos, calling it “100 percent safe, once applied,” in his 1997 book The Art of the Comeback. In the same tome, Trump wrote: “I believe that the movement against asbestos was led by the mob, because it was often mob-related companies that would do the asbestos removal.”

In 2012, the future president tweeted that the World Trade Center “would never have burned down” after the September 11 attacks if asbestos hadn’t been removed from the building.

Certain uses of asbestos, such as in flooring felt, are banned in the US but it is still permitted in clothing and roofing. An EPA review of asbestos regulations, kicked off under the Obama administration, saw Pruitt announce in June “important, unprecedented action on asbestos.”

This action states that the EPA will evaluate new uses of asbestos using the “best available science” but does not ban the materials. The range of asbestos uses examined by the EPA has been criticized as being too narrow, as it won’t cover, for example, the millions of pounds of asbestos dumped in landfills or used to coat piping in buildings.

“By allowing asbestos to remain legal, the Trump administration would be responsible for a flood of asbestos imports from Russia and other countries into the US, as well as the wave of illnesses and deaths that will continue for years to come,” said Linda Reinstein, co-founder and president of the Asbestos Disease Awareness Organization.

Last year, Brazil, which was responsible for the bulk of asbestos exports to the US, joined about 60 other countries in banning the product, leaving Russia as the major source of asbestos sent to America.