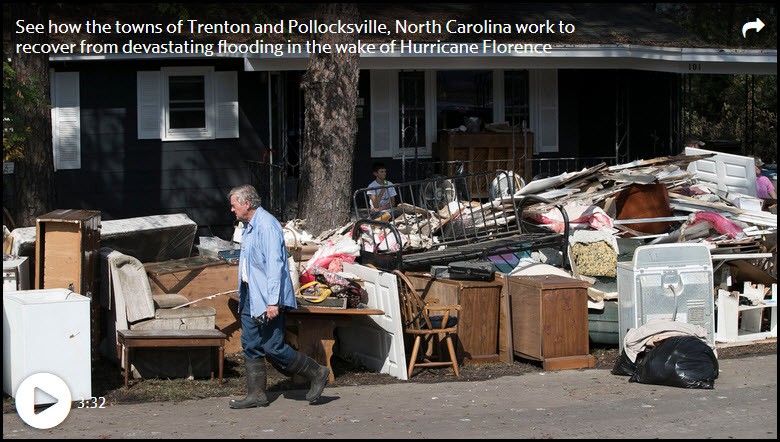 Video screenshot: The Trent River rose to record flood levels during Hurricane Florence. More than a week after the storm, Jones County residents returned to rebuild their homes, businesses and places of worship — By Robert Willett

State political leaders on Tuesday crafted disaster-relief legislation aimed at quickly moving millions of dollars to ensure compensation for school employees and allow schools to waive up to 20 school days in the hardest-hit counties.

Flexibility on voter registration and polling places damaged in the storm are also part of the recovery plan.

The $56.5 million in relief is just the first step in what is expected to be months or years of recovery efforts. Legislators plan to return on Oct. 15 for additional funding consideration after state agencies are able to assess how much more money will be needed.

“We’ve got a lot of problems, no question,” Sen. Harry Brown, a Republican from Jacksonville who is the chief budget writer in the Senate, said in a committee meeting. “This is just the beginning of a lot of what we’re going to do.”

Legislative leaders and Gov. Roy Cooper, who is expected to approve the legislation, said they are in agreement about Tuesday’s funding. Legislators said it was the quickest storm recovery response in recent memory.

“It’s always good to see partisanship and some of the crazy divisions we let ourselves get into have been put aside for everybody to work together,” House Speaker Tim Moore said on the House floor. “This special session is an example of that.”

All of the money approved for disaster-relief on Tuesday will come from the state’s rainy day fund.

The education portion of the recovery plan moves $6.5 million to pay school cafeteria workers, whose jobs are funded by lunch receipts. All school employees will be paid the same as if they had worked during September and October.

The money will be used for school districts in counties under federal major disaster declarations to deem up to 20 school days to have been already completed. School districts can set their own requirements for making up instructional days or hours that have been missed because of the storm, and the proposal also gives them the option to waive the missed time.

Sen. Floyd McKissick, a Durham Democrat, said he was concerned that 20 days could be too much.

“I don’t want to see our students academically shortchanged,” McKissick said. “It’s fine to do something that is expedient today, but those kids have to be able to compete, take the same end-of-the-year tests for their grade level, and you don’t want to put them at a disadvantage trying to compete with other schools in other districts. That’s missing a month of school.”

An additional $50 million will be included in the state budget in order to make the state eligible for matching federal money for a broad range of needs.

The State Board of Elections and Ethics Enforcement will get money to educate voters uprooted by Hurricane Florence on how to cast ballots and would be required to distribute information to shelters and other organizations helping those residents.

The education effort, along with extending the voter registration deadline by three days, to Oct. 15, in counties under federal disaster declarations, is the legislature’s response to the disruption brought by a devastating hurricane as election season enters its final phases.

The State Board of Elections and Ethics Enforcement would get $400,000 for its voter education efforts in flood-stricken counties. Motor vehicle fees would be waived for those who need duplicate records that were lost in the flooding.

At a meeting of the Council of State in Raleigh on Tuesday morning, Cooper said the death toll from the storm has reached 39.

“We lost 39 lives. But we also saved many lives with these early evacuations and by our heroic first responders,” Cooper said. He noted that 28 counties are still operating in a state of disaster.