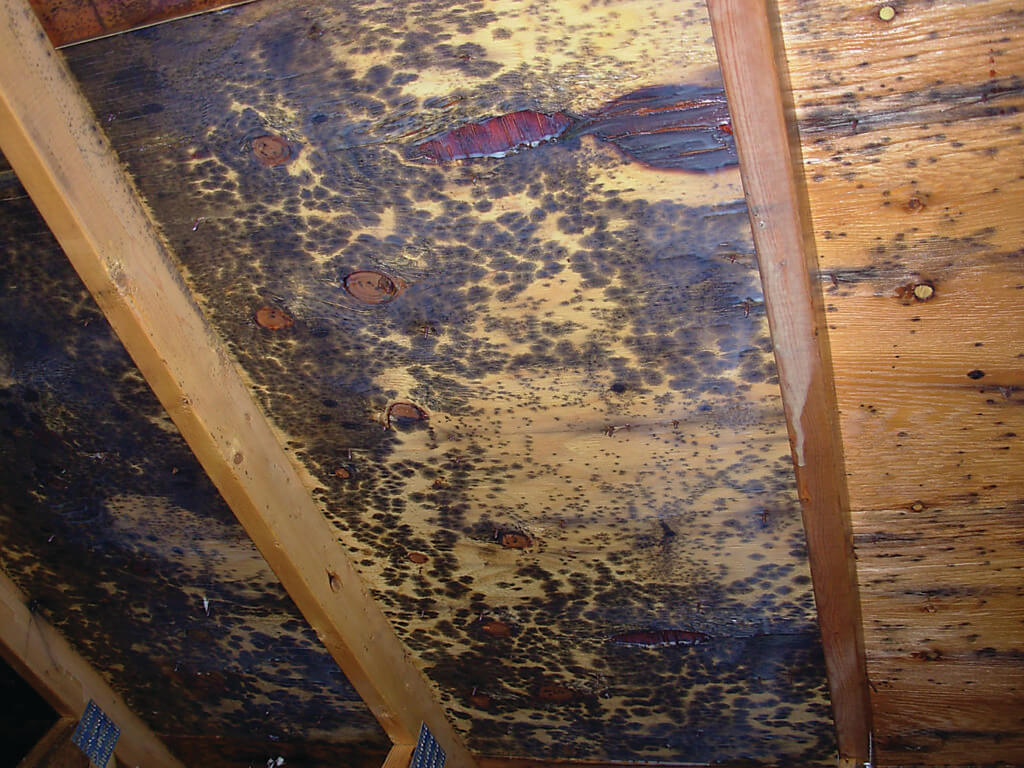 We get a number of calls about attic mold, especially during real estate transactions.

Ironically enough, a building occupant is much more apt to be exposed to spores from mold growth in a basement than in an attic, because air in a house flows from bottom to top and out, especially in the heating season. Still, in a house with central A/C, there may be leaky ducts in a moldy attic, or an air handler with a filter holder that isn’t airtight. Then spores from attic mold growth can be entrained into the mechanical system. And occupants who use the attic for storage can disturb mold growth.

Once it has been established that black staining on attic sheathing is indeed mold growth, the first question to ask is: why is it growing and/or why did it grow there? (Due to high summer temperatures, such mold growth is often dead, but that doesn’t mean it’s no longer allergenic.) If this question isn’t answered, a lot of money can be spent on remediation, and the mold growth will most likely return.

I worked with one young couple who moved into their new home a few months before they called me. Neither of them saw mold in the attic during the home inspection or when they moved in. Yet when they went up into the attic in mid-December to retrieve their stored Christmas decorations, they saw dark black staining on the sheathing. The wife had allergies and so was concerned. I could see mold growth on the attic sheathing at both gables, as well as on the gable-end wall sheathing. A moisture meter confirmed that damp-appearing spots on the sheathing were indeed wet, and I could even see some small spots of ice on the wall. The couple had two young children. Because they found that the hot-air heat made the indoor air feel dry, they were using a number of portable humidifiers, including in their children’s bedrooms on the second floor. They told me that they estimated they were using several gallons of water a day to humidify the indoor air. That moisture was rising up into the attic through leaky pull-down stairs, leading to condensation and mold growth on the cool attic sheathing.

I recommended mold remediation under containment to prevent the spread of potentially allergenic dust. The roof was older, so another option would be to install a new roof, replacing the sheathing at that time. The moldy rafters would have to be cleaned and sealed before installation of the new sheathing. The family also had to stop pouring so much moisture into the house, and cover the pull-down stairs with an airtight, insulated box to prevent moist house air from flowing up into the attic.  Alternatively, the couple could have spray polyurethane foam (SPF) installed between the rafters after the sheathing was dry. This would encapsulate the mold and change the attic into a “conditioned” space. Prior to that installation, the plywood flooring and existing insulation would need to be removed, so that the floor framing and ceiling drywall could be HEPA vacuumed and lightly spray-painted to adhere residual, allergenic dust before new flooring was installed.

My one caution with SPF is that if improperly mixed or applied, the insulation can off-gas noxious odors, so an experienced company should be hired. In addition, SPF must be covered with a fire-protective coating such as intumescent paint. I recommended that a DennyFoil barrier be stapled to the rafters, and then drywall installed to cover the barrier and foam. The foil would prevent off-gassing, and the drywall would act as a fire-protective coating.

In another home, the owner had been in residence for over 10 years. He called me because while he was having some windows replaced, the installer had looked into the attic and found mold on the plywood sheathing. I could see visible mold growth on all the roof sheathing and gable-end sheathing, as well as smaller amounts of mold on the rafters. There were also puddles of black water on top of the vapor barrier and droplets of condensed water on the bottom side of the vapor barrier. Both bathrooms on the second floor of the home were venting into the soffit, which was covered with perforated vinyl at the exterior.

The owner had scheduled a remediation company to deal with the attic-mold problem, but I told him that since his roof was over 14 years old, it might make better financial sense to replace the roof and sheathing altogether. Whichever path he chose, until the mold was eradicated, I recommended that he stop using the all-house fan, which pressurized the attic, blowing moldy dust back down into the house. The bathroom exhausts also had to vent to the exterior and not into the attic or soffit. And meanwhile, he had to stop his teenage daughters from taking such long, hot showers!

Right about now you may be asking “What about attic ventilation?” Soffit and ridge vents aren’t altogether that effective. In one house in which a bathroom fan exhausted into the soffit, there was passive air flow into the attic via the fan. I asked the owner to stand below the fan with a smoke pencil and add smoke to the air. I stood in the attic and watched as the smoke entered the soffit. Some of the smoke rose up in a laminar sheet along the sheathing (heated by the sun), and flowed under the ridge vent and over the ridge pole to the other side of the attic. The rest of the roiling cloud of smoke moved slowly up between the rafters, crashed into the ridge beam and then sank to the floor. I could not even tell if any smoke went out through the ridge vent. There was visible mold growth on the attic sheathing – heaviest near the soffit into which the exhaust hose was inserted.

I can’t tell you how many properties I’ve seen in which the installers had never cut holes for the ridge vent. Even if properly installed, many ridge vents aren’t adequate. Charles Headrick, an engineer with Headrick Building Products, built a rooftop/attic simulation device to test various ridge vents. He made temperature measurements in his experimental attic while heating the shingles with lamps to simulate the sun. He compared the temperature increases to a two-inch fully-open slot, to the temperature increases to a two-inch slot completely blocked with duct tape. Some roll-type ridge vents did not perform much better than duct tape!

Air flows from higher pressure to lower pressure. Even with both properly installed soffit vents and ridge vents, the pressure differences in the winter (excluding wind influences) due to air temperature differences between the cold attic and colder exterior are not usually great enough to create ventilating airflows.

In my opinion, gable-end vents are the most effective way to go. One owner called me because his moldy attic had been remediated, and the mold growth was beginning to reappear, even though at the remediation company’s advice he had installed soffit and ridge vents. He had also closed off the gable-end vents, because he’d been told that “those are defeating the soffit and ridge vents.” I was at the property on a hot summer day, and the attic was sweltering. I asked him to remove the poly covering the two gable-end vents, and within minutes, the attic was more comfortable.

In New England where I live, mold doesn’t grow in an attic in the summer, because any moisture that flows up into the attic from the house does not condense. In the winter and on cool, clear spring and fall nights, however, the moisture will condense on the cool sheathing, leading to mold growth. And it’s not just humidification that adds moisture to house air.

Building occupants produce moisture in a myriad of ways.  We exhale water vapor when we breathe. We sweat. We hang wet clothes to dry indoors. We take showers. We boil water on the stove. All this moisture will rise up into the attic if there are pathways for airflow. Seal those pathways, and you will minimize the chances of attic mold growth, no matter what kind of attic ventilation is present.

Stains around nails are not mold growth but are due to the chemical reaction between wet iron and tannins in the wood.

Recommend that bathroom fans and the cook-stove fan exhaust to the exterior. An attic hatch or pull-down stairs should be as airtight as possible and be covered with a tightly-fitting insulated box. A door leading to attic stairs should be insulated at the attic side and have gaskets and a sweep as needed. Check to be sure that the dryer hose is intact and exhausts to the exterior (or exclude that in your report). Older recessed lights can also be leaky.

In a house with hot-water or steam heat and a separate air-conditioning system in the attic, supplies and returns should be closed in the heating season, especially near a bathroom; otherwise, passive airflows can carry moisture into an attic air handler (as well as the duct system). If there is dust in the system due to inadequate filtration, mold will grow.

Founder and Principal Scientist of May Indoor Air Investigations LLC in Tyngsborough, MA (www.mayindoorair.com), Jeffrey C. May combines his education as an organic chemist and his over twenty-five years of experience investigating building problems to specialize in indoor air quality (IAQ). He is a former Adjunct Faculty Member in the Department of Work Environment at University of Massachusetts Lowell, and is author or co-author of four books on indoor air quality (published by The Johns Hopkins University Press), including My House is Killing Me: The Home Guide for Families with Allergies and Asthma. Jeff is a nationally recognized speaker at annual conferences for the IAQ Association and the Maine IAQ Council, among others. He is a Council-Certified Microbial Consultant (ACAC) and a Certified IAQ Professional (AEE), and is licensed in the NH and FL as a mold inspector/assessor. Jeff holds a B.A. from Columbia College (chemistry) and an M.A. from Harvard University (organic chemistry). See http://www. mayindoorair.com for details about Jeff’s company’s services, and www.myhouseiskillingme.com for more information about Jeff’s publications and work. You can contact Jeff at jeff@may-indoorair.com or call 978-649-1055.

Refer your clients to my book My House is Killing Me! We expect Edition 2 to be published in 2020 by The Johns Hopkins University Press.