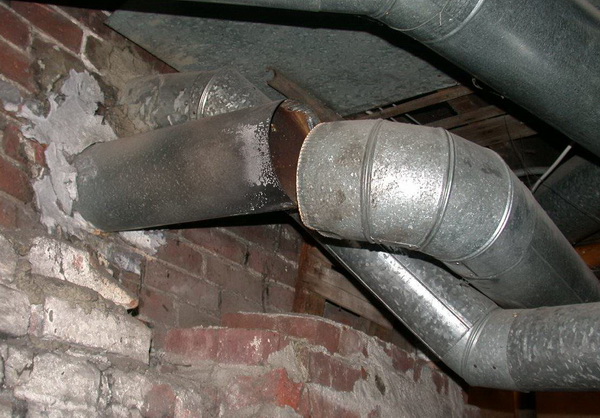 Building and indoor-air-quality professionals should be aware of visible conditions that can lead to airborne irritants, contaminants, and allergens.

A woman who lived out-of-state called our office in the hopes that we could help her. She sometimes experienced headaches and dizziness when she did the laundry. Her husband suspected that she was exaggerating. When I arrived at the property, she was welcoming but he stood back on the staircase with his arms folded and his look icy.

I figured out what the problem might be before I even got out of the car.

The front of the house had a deep L-shape with a three-car garage jutting out on one side and the entranceway on the other. The mechanical room faced the “L” in the front. The room contained the washer and dryer at one end and a direct-vented boiler at the other; the boiler took its combustion air from the room.

The combustion-air intake for the room and the direct-vented exhaust pipe were located about 18 inches from each other at the outside of the L, and there was a deep overhang all along the front of the house. The geometry of this arrangement trapped the combustion products close to the exterior wall at grade, and the products were sucked back into the room through the combustion-air intake. When the woman did laundry when the boiler was operating, she was exposed to elevated levels of carbon monoxide (CO).

The solution? Move the boiler exhaust or the combustion-air intake.

In another case, a real estate agent was running an open house in a small, immaculate single family. It was an antique but had been lovingly renovated. It was a rainy day, so there was very little traffic at the open house. The real estate agent sat quietly in the living room reading a book, when suddenly she felt nauseous and dizzy. She spent the rest of the open house standing outside in the rain, taking in deep breaths.

The boiler exhausted into a chimney that still had an opening for a wood stove that had probably once heated the house but that was no longer present. A loose piece of metal covered the hole. There was only one flue in the chimney. When combustion products entered the chimney, the air took the shortest route back into the living room. The real estate agent might as well have been reading inside the chimney! She had always wondered why the windows in the house were open whenever she was there, and now she knew why.

Fallen oil-furnace vent pipe in another house with unhealthy air

In a third property—a very tightly constructed, three family—the hot-air furnaces were hung from the ceiling in the multi-car garage. The filter slots were open, so return air was being drawn in from the garage. When automobiles were started up, that air contained CO from the cars’ exhaust. My clients did not purchase the condo but did suggest that Jack Kevorkian might be interested (for those of you too young to remember, Kevorkian was notorious for his CO euthanasia plan).

Dryers should not be vented for great lengths through cold spaces. I inspected one house in which the dryer vent traveled through an unheated attic. The warm, moist air from the dryer cooled as it traveled through the piping. Water condensed within the piping, leaked out the joints, dripped onto the garage ceiling, and created stains about every six feet where the sections of pipe connected.

In another house, the dryer vented directly into a cold, attached garage. When I looked into the garage I faced a nightmare. Water was dripping from the walls and lint was stuck to surfaces. Moisture and biodegradable material mixed together equal? MOLD!

In one house the bathroom exhaust vented into the soffit. Even with the fan off, there was significant passive air flow from the bathroom into the vent grille. I asked the homeowner to feed non-toxic smoke from my smoke pencil into the grille. I stood in the attic to watch the smoke-filled airflow as it flowed into the soffit. The smoke separated into two distinct flows. One narrow laminar band of smoke moved quickly along the sheathing, flowed up to the ridge vent, and then flowed back down the other side of the ridge pole. The second, slower-moving smoke cloud was turbulent and rose slowly until it encountered the ridge pole, at which point it sank to the floor of the attic.

Why was this happening? The sun was shining on the sheathing so the sheathing was warm and created a narrow band of laminar air flow. That air rose up to the ridge and its momentum carried it over the ridge pole; the opening at the ridge vent was inadequate and there was no flow into it.  The roiling, turbulent cloud that followed behind was almost the depth of the rafter bay and when it struck the ridge pole, it just sank to the floor.

More than once, I’ve inspected a crawl space into which a dryer was vented. You can just imagine the moisture and moldy lint I saw on all those surfaces.