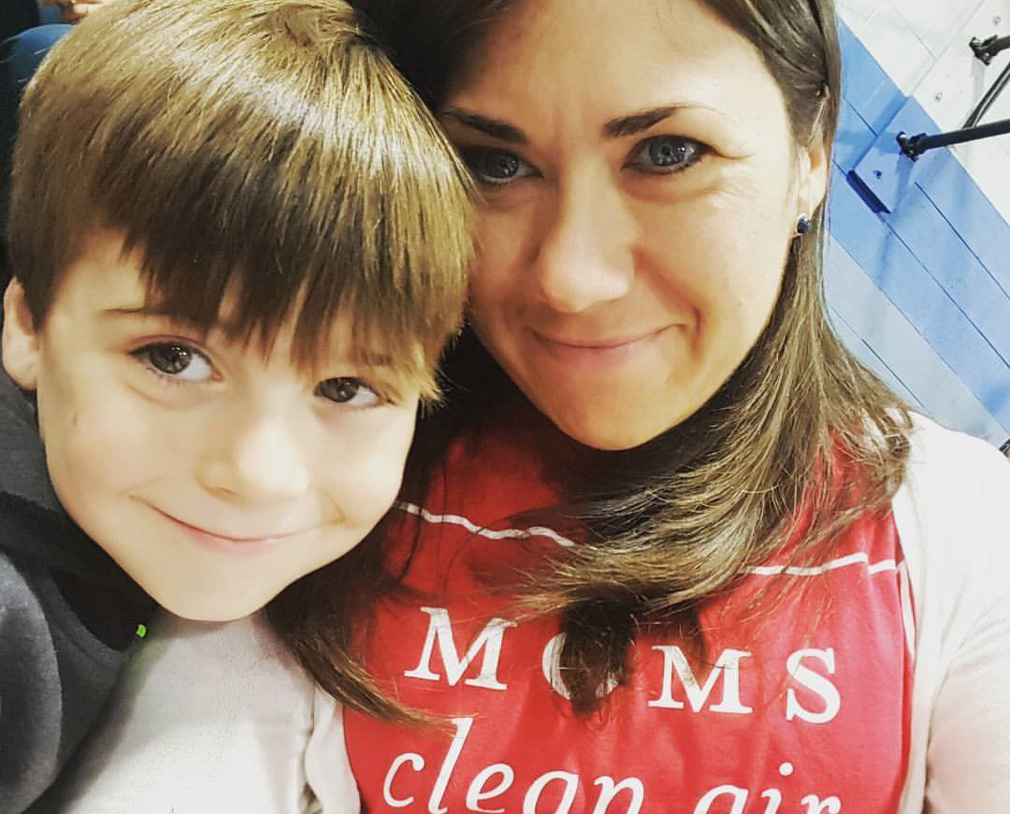 Trisha Dello Iacono knew there was something at New Jersey’s Wenonah Elementary that was making her 9-year-old son sick. She had a thick file for every time he’d gone to the nurse with migraines, or vomiting from nausea.

It escalated early this year. He began developing a tic. She thought he was simply cracking his neck, but when she asked about it, he admitted he couldn’t control the motion. She also discovered that his hands were pink, painfully raw, and peeling, although he was adamant he hadn’t been using different soap or hand sanitizer. The only thing different in Liam’s routine: from January to March, he had spent every day after school in the all-purpose room practicing for a school play.

In April, the principal sent a letter to parents stating that the all-purpose room’s rubber-like synthetic flooring contained a chemical called phenylmercuric acetate, which releases mercury vapors into the air.

Rubber-like polyurethane floors, which contain phenylmercuric acetate (PMA) as a catalyst, have been installed in schools, gyms, cafeterias, stages, and indoor and outdoor tracks since the 1960s. New Jersey Education Association notes that it’s unknown how many of these floors exist in schools throughout the country, although NJ has identified at least three, as has New York; Arizona has identified over 170.

The NJ Department of Health labels PMA as a probable carcinogen and linked to birth defects. In the short term, exposure can cause nausea, vomiting and abdominal pain and can severely irritate the skin, impacts that mirrored Liam’s health issues, in addition to other problems.

PMA also releases mercury vapors as it breaks down. Mercury is a potent neurotoxin that is particularly harmful to pregnant women and children. According to the World Health Organization:

“The inhalation of mercury vapor can produce harmful effects on the nervous, digestive and immune systems, lungs and kidneys, and may be fatal… Neurological and behavioral disorders may be observed after inhalation, ingestion or dermal exposure of different mercury compounds. Symptoms include tremors, insomnia, memory loss, neuromuscular effects, headaches and cognitive and motor dysfunction.”

The NJEA Guide to Mercury in Rubberized Flooring explains that “exposures are worse if floors are damaged or deteriorated, in hot rooms with poor ventilation, no outdoor air being pulled in, or no air conditioning.” It also states that exposure levels depend on the state of deterioration of the floor.

The federal EPA threshold for chronic mercury vapor inhalation is .3 micrograms per cubic feet of air, but state thresholds vary widely; New Jersey Department of Health is high at .8 micrograms, for example, with California setting a much more conservative level at .03 micrograms. However, it’s worth noting that these levels are set for adults.

Most children are shorter than adults, which means they’re breathing closer to the floor where higher mercury vapors would typically exist. Students also frequently sit directly on the floor in gyms and all-purpose rooms, and some, like Liam did during school play practice, eat their lunches or snacks off the floors.

Students engaged in any physical activities common to these types of room also have increased respiration, meaning they’re breathing more potential vapors. NJEA states that, “coupled with their lower body weight and higher intake rate, the result would be a greater dose of mercury vapor per unit of body weight.”

What Happened at Wenonah, NJ?

Wenonah Elementary closed its all-purpose room on April 8 to test for mercury vapors. On June 26, it reported 230 nanograms of mercury per cubic feet air in air samples with its HVAC (air circulation system) set to 20%, below the NJ limit but well above the CA limit. The report noted that results indicated that slightly higher temperatures in the room—as is a common occurrence when packing most of the schools’ students into the room for events—could result in higher mercury levels over the NJ limit.

The report also found that the fresh air dampers had been closed previous to the testing—when Liam and other students spent so much time in the all-purpose room—meaning that little to no fresh air was entering the space, which results in higher levels.

The Wenonah Board has made the decision to re-open its all-purpose room as of September 1 with no further action. Dello Iacono has since moved, and Liam attends another school district. But she’s both active on the federal level, and is still be part of the Wenonah Safety Task Force, made up of five moms leading the charge to convince the school not to re-open the room, seeking state or federal funds to remove the flooring, and creating an alternate plan for student gatherings, as some other schools have done that have discovered mercury vapors from flooring.

FIND OUT if your child’s school has PMA in flooring, actions to take, and solutions.