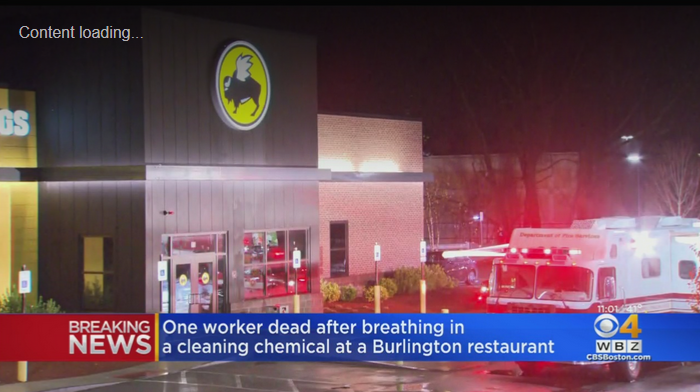 “One employee described the chemical as smelling like “ammonia and chlorine.”

A worker at a Buffalo Wild Wings in Burlington, Massachusetts died and 10 others were sickened after a chemical accident Thursday night.

Fire officials said the incident may have been caused by sodium hypochlorite, a chemical found in a floor cleaner called Super 8, local media reported. REAL LIFE. REAL NEWS. REAL VOICES. Help us tell more of the stories that matter from voices that too often remain unheard. Subscribe Now

“This is a product that we have been told, that it’s a common product used for floor cleaning, for some reason tonight there was just a reaction that led to this,” assistant fire chief Michael Patterson said, per local CBS station WBZ.

He also said the worker who died had “attempted to squeegee the product out of the building when he was overcome.”

Ten people checked themselves into the hospital after suffering from difficulty breathing and eye irritation, local ABC station WCVB reported.

According to USA Today, two of those hospitalized were customers; the rest, workers.

One employee who was inside at the time described the smell as “ammonia and chlorine” and said people started coughing.

“At first, I just thought it was the dishwasher, someone poured some chemicals down,” Jim Jorefice told NBC Boston. “But then, it got stronger and stronger.”

“We’re just sitting there and then all of a sudden we start smelling the whatever it was, ammonia or whatever it smelled like, and all of a sudden the inside of my nose starts burning,” an unidentified customer told WHDH. “We see the employees, like, the waitstaff, everybody, just flee.”

The restaurant was evacuated and firefighters entered the building wearing hazmat suits:

“We are shocked and saddened to learn of this horrific accident at our franchise-owned sports bar and are working closely with our franchisee and the authorities while they conduct an investigation,” Buffalo Wild Wings said in a statement cited by WHDH.

The fire department urged anyone who may have been exposed to seek medical attention.