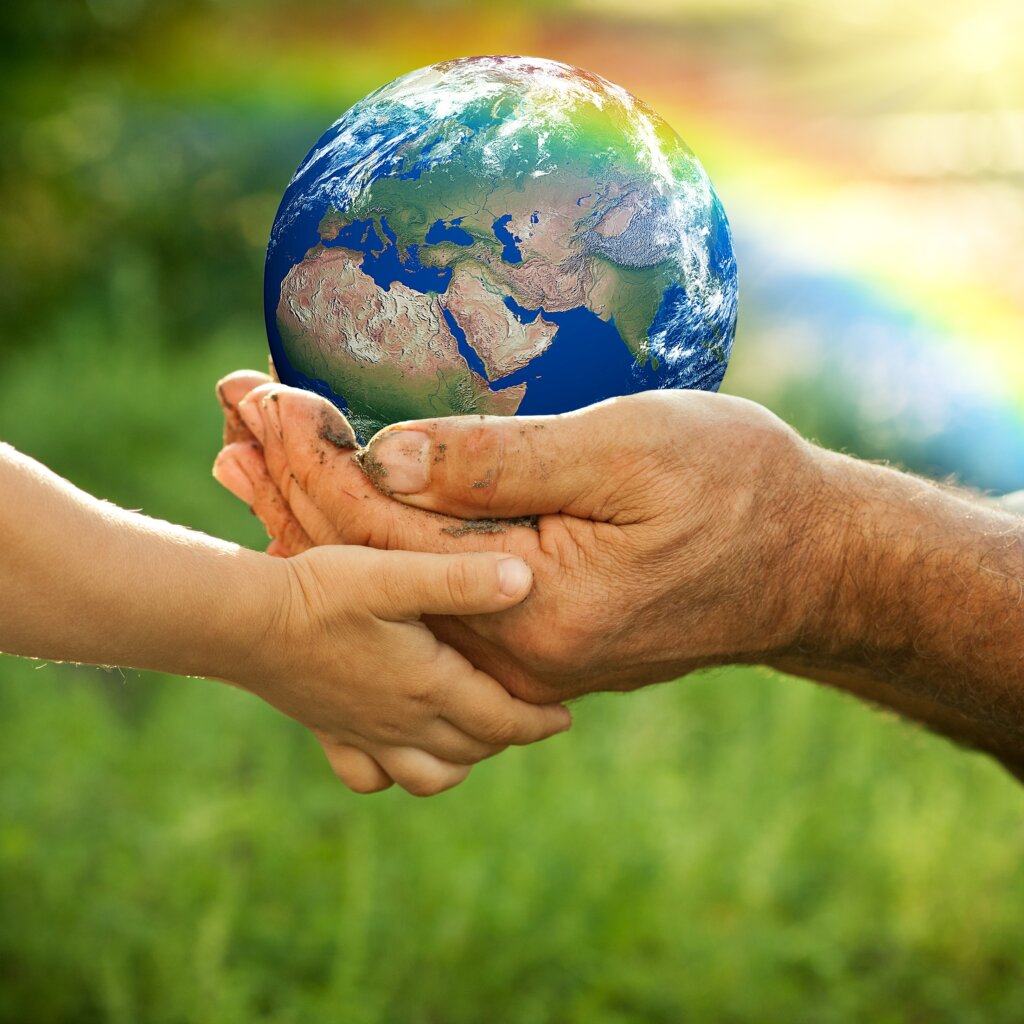 The other day, while I was enjoying my morning coffee, my 6-year old granddaughter, Zoey, cuddled up next to me to show me a picture she had drawn in kindergarten.  It was a picture of the earth with a sad face and surrounding the earth was an array of tiny little circles.  After the usual grandfatherly-like kudos about her artistic talents and a steady stream of “good jobs”, I asked her to tell me more about the picture.  She then proceeded to tell me that mother earth had a fever and that the little circles that I had mistaken to be other planets were, in fact, tears.  Then, she asked me “the” environmental question that all environmental professionals fear. “Nonna and Mommy told me that you could tell me why the earth is getting warmer, Pop Pop.  What is making mother earth so sad?”

I glanced at my wife and daughter who were now slinking away into the other room, hiding out of sight but still in earshot to see how I would explain the complicated science of global-warming to a 6-year old.

I took another sip of coffee to fortify myself hoping that the caffeine might spin a few good thoughts on how best to start the conversation.  Finally, I took a deep breath and said, “Well, Zoey, it has to do with science.”  With that I heard a not-so-silent cough to get my attention and found my wife shaking her head vehemently and mouthing the words “she is only six!”  So much for the magic of caffeine.

I then thought that perhaps I should talk about how our leaders view climate change. I dismissed that out of hand as a waste of time.  No caffeine needed.

I looked down at Zoey, who was becoming impatient, took another sip of coffee and decided to just launch into it and see what words came out.

“Zoey, do you remember when you and your family moved from your old house to this one?” I asked.

“I understand.  But once you got here and saw how nice your new room was, it was OK.  Right?”

“Here, you have a bigger house with a big yard and a garden and a pool for swimming,” I continued, not knowing exactly where I was going with it.

Seeing my opening, I quickly added, “And Mother Earth is happy for you.  She provided the water for your pool and the soil in the backyard for your garden.”

“Yes” she replied.  “And I’m taking swimming lessons too.”

“That’s great!”  I exclaimed.  “Okay, let me ask you another question.  In school have you learned about the pilgrims?”

“Yes, we did a play about the pilgrims and I was a tree,” she exclaimed.

“Well, when the pilgrims first came to America, many of them were sad because they had to leave their old homes back in Europe and find new ones here, just like you did when your family moved here.”

I had her attention and so I continued.

“Well, over time the Pilgrims got used to living here and Mother Earth was very happy for them.  She provided clean air for them to breathe, clean water to drink, fish to eat and rain to help grow vegetables just like your garden out back.”

“They ate turkey and corn,” she added.

“Yes, they did.  But, over time their small group of people began to grow.  More babies were born, and they found that they did not have enough room for everyone.” I explained.

“So, did they move to a bigger house like we did?” she asked.

“Yes, some stayed behind but others moved farther away to build new homes.  But they were sad because they missed the people they had left behind.  So, some smart people got together and invented new ways for them to keep in touch with their friends.”

“Well, that came later, but you get the picture.”

“Yes, she was still very happy.  She provided fuel for their heat and wood to build their homes and all was good.

“Well over time, these families got bigger and bigger and people had to move farther and farther away.  Many were sad to move and so some smart people got together again and invented things like the telephone and the automobile and farm machines that helped make their lives easier.  Mother Earth helped them find coal for heat, fuel for the cars and metals for their machines and all was good.  Some of the people didn’t like the new automobiles because they scared the horses and they didn’t like the telephone poles because they were ugly.  But they knew they had to change and so they did.

Zoey snuggled into me.

“Over time, our families kept getting bigger and bigger and we kept moving around and smart people kept getting together to help us.  They built factories and made rubber for tires and steel for machines.  They made clothes from fabrics and chemicals to help make things better for us.

“And, Mother earth stood by us all this time and was happy to provide what she could.  But she was also looking over her shoulder and noticing that other countries were growing just as fast as we were.”

“Yes. Like Australia and Brazil and India and China and a lot of other countries,” I replied.

“Well, the reason that your teacher said that Mother Earth had a fever is that we and all of these other countries are now growing so fast that Mother Earth is having a hard time keeping up with us. We keep asking her to do more.  We also discovered that in our hurry to make things better, we were making Mother Earth’s air and water dirty.  And so smart people got together to figure out how to keep everyone happy and keep the environment clean too.”

“Yes, that’s right, Zoey.  At EPA I worked with a lot of smart people to clean up the air and water.”

“Yes, Mother Earth will be okay if we all work together to protect her.”

Then I leaned into her and whispered into her ear.  “Also, Mother Earth has something up her sleeve.”

“Well, not really.  Something better!” I replied.

“The answer was always right in front of us.  Mother Earth folded her arms like your Mom does sometimes when she is impatient, and she tapped her toes and pointed around her.  She had wind and the sun and even the energy inside the earth.

“Doh! I said, slapping my forehead for emphasis.  We have had all of these gifts around us forever and were hardly using them!”

“So did those smart people get together again?” she asked.

“Yes, and we now have windmills and solar panels and dams that make energy from water and we are starting to make it easier for Mother Earth.  Some people don’t like it because they say the windmills are ugly and the solar panels take up too much room……”

“We have more to do to help Mother Earth and her fever.” I continued.  “You see, for many years we have been sending chemicals up into the air.  Mother earth is pretty good at sweeping them away.  She sends a lot of the chemicals down to the oceans and the oceans swallow them up.  And, we keep growing and Mother Earth and her oceans are starting to struggle. She’s doing everything she can and we need to do everything we can to help her.”

Zoey followed my logic. “So, we may not like to change but if we want Mother Earth to be happy and healthy, we need to change!” she explained. (Did I tell you she is a smart cookie!)

“That’s right.  So, what you need to do is to work with your friends and teachers and help people my age understand that change is Ok, and we need to work together and make those changes now.”

She then bounced off my lap and trotted away and within seconds became absorbed in something else.

I looked over to see my wife and my daughter give me two thumbs up.  I had passed the test, but had I really?

There is a part of the Brundtland definition of sustainability which often gets lost in the conversation.  “Sustainable development is development that meets the needs of the present without compromising the ability of future generations to meet their own needs.”  Putting it more bluntly, if there are things that current generations like mine and yours can do now to advance sustainability, we need to do it.  We should not leave it for future generations, like Zoey’s, to deal with. As I watched my granddaughter play in the other room, I felt a certain pang of guilt.  I had just told her, in simplest terms, that it was up to her generation to find the solution to what is happening with the climate.  I was wrong. It is not up to her generation.  It is up to all of us to work together, here in America and globally to fix the problem.  We all need to work toward that solution. Sure, I put 44 years into federal service working to protect the environment.  I can make a good argument that I did my part.  Then I look Zoey and my other ten grandchildren in the eye and realize that I cannot make that argument.

So, in closing, I guess that is the challenge for each of us.  When you have the environmental conversation with your children or grandchildren, take a good long moment to look into his and her eyes and ask yourself this question.  Can I sit back and let them bear the full burden?

As a scientist, I have to conclude with a bit of scientific rigor.  If you are interested in viewing some of the results of global warming, check out these links: https://nsidc.org/    and https://www.ncdc.noaa.gov/cdo-web.

Next up, I’ll reflect a bit more on the role of our grandchildren when it comes to global warming.

All views expressed here are my own and do not represent the opinions of any entity whatsoever with whom I have been, am now or will be affiliated.

Tom Murray is a pollution prevention and sustainability expert, most recently serving as a Senior Science Ad-visor with the United States Environmental Protection Agency. Tom has over 44 years in government service. He is the architect of several environmental partnership programs. Tom holds a Bachelor’s Degree in Biolo-gy from Mount Saint Mary’s University in Emmitsburg, Maryland and a Master’s Degree in Biology/Environ-mental Science from the American University, Washing-ton, D.C. Tom retired from federal service in January of 2016 and is now president of Tom Murray Environmen-tal Consulting located in rural Maryland. Email him at: tmmurray49@outlook.com