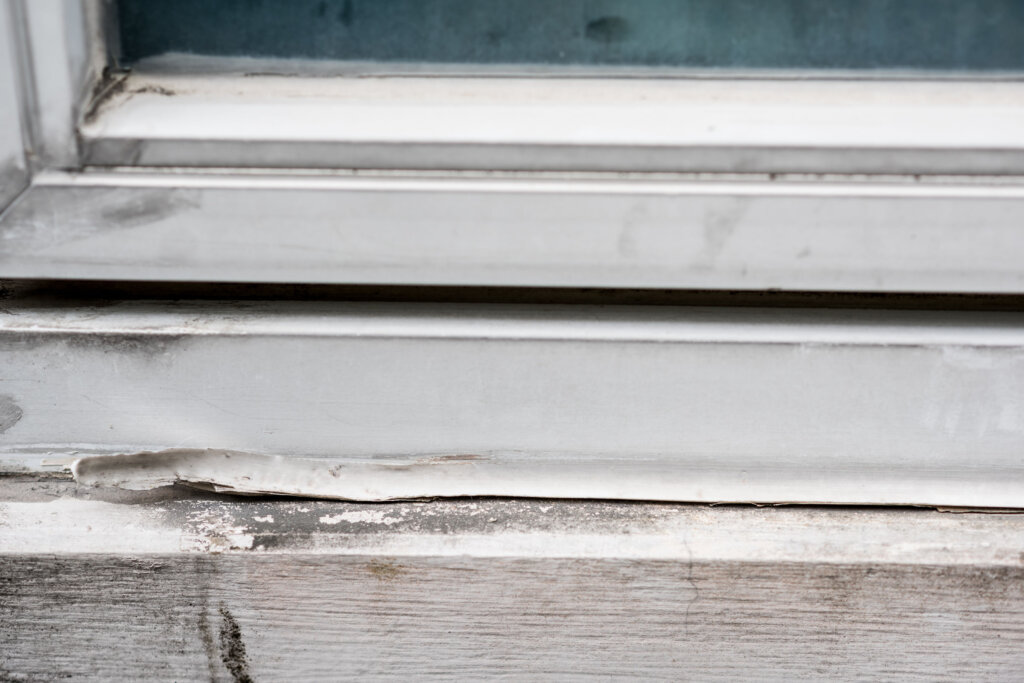 Most people are aware that exposure to asbestos or polychlorinated biphenyls (PCBs) can be hazardous, but far fewer know that some types of caulking used in the past contain both asbestos and PCBs. In fact, there are reports that indicate some caulking compounds used to build and renovate buildings up until 1979 had considerable concentrations of each of these materials, both designated by the U.S. Environmental Protection Agency (US EPA) as Hazardous Air Pollutants (HAPs).  Exposure to both asbestos and PCBs can lead to adverse health effects.  Asbestos is designated as a Group 1 Carcinogen by the International Agency for Research on Cancer (IARC) and exposure is known to cause Lung Cancer, Mesothelioma and Asbestosis.  Exposure to PCBs and dioxin-like PCBs can affect the immune system, reproductive system, nervous system, endocrine system and is also designated as a Group 1 human carcinogen by IARC.

Caulking and caulk products are elastic sealant materials that are used to fill cracks and joint gaps and are used to seal windows against drafts.  Caulking and caulk products were commonly used both indoors and outdoors and were applied in both residential and commercial settings to seal windows, door frames, boilers, pipe joints, masonry columns, building joints and exteriors. Caulk products were designed to be weather proof, pliable, resistant to heat and water and to be durable, which is why both asbestos and PCBs were used in its formulation due to their respective beneficial properties.  Asbestos was added to caulking and caulk products from roughly 1950 to 1979 and the US EPA estimates that caulk used in this time period can contain up to 25% asbestos.

Polychlorinated Biphenyls (PCBs) are regulated by the U.S. EPA. PCBs are currently prohibited from being used in caulk and other commodities (U.S. EPA, 40 CFR 761).  However, prior to 1979, PCBs were present in some caulking materials used in the construction of schools and other buildings.  Studies have shown that concentrations of PCBs can exceed 1% (10,000 ppm) by weight in some caulk materials.

If caulk contains asbestos, the asbestos fibers can be released as the caulk ages.  With time, sun exposure and weathering, the material can dry out, break down and become brittle and friable.  Asbestos fibers can also be released if the caulk is subjected to demolition and renovation activities such as scraping, drilling, and sanding and attempts to remove it.

If caulk contains PCBs, the PCBs may be released into the air through off-gassing. This may occur when the caulk is intact and undisturbed or if it is deteriorating as described previously. PCBs in the air originating from caulk can then be absorbed into other building materials, creating secondary sources which can then re-emit PCBs into the air. PCBs in manufactured materials such as caulk may also move directly into adjoining materials, particularly porous materials such as wood, concrete, and other types of masonry.

A January 4, 1993 US EPA Clarification letter addressed how EPA’s asbestos NESHAP regulation applies to window caulk, glazing compounds, wiring and other similar materials in response to questions submitted to the EPA about whether  caulk needs to be removed prior to demolition or renovation activities.  EPA responded in that letter as follows; “Response 5: To the extent that window putty containing asbestos is a pliable asbestos-containing sealant or mastic that is in good condition, (and therefore, a Category I ACM), it is not required to be removed prior to demolition. However, window putties will become regulated ACM if they have become friable or are subjected to sanding, grinding, cutting or abrading.” “Response 6: The stringency of the rule was not increased with the November 20, 1990 revision. The new terms of Category I and II non-friable ACM were added to the rule for clarification that non-friable ACM does not always remain in a non-friable condition.”

Representative samples of caulking materials from buildings prior to renovation or demolition work should be tested to determine whether the caulk contains asbestos and/or PCBs. The good news for the building inspector is that the time period for the use of both asbestos and PCBs largely overlap, therefore buildings that were built or renovated between 1950 and 1980 are the primary years of use that should be considered suspect.

For sampling, it is also beneficial that one sample may be collected for both asbestos and PCB analysis.  Two separate discreet samples may be collected if desired, however this is not necessary.  A sufficient sample size should be collected to ensure the laboratory has enough material to perform both analyses.  Take care to ensure that only the caulk is included in the final sample and no other adjacent materials, such as wood or concrete are collected that may skew the sample analysis results.  Physically remove a portion of the caulk material to be tested and place in a Ziploc™ bag or 2 oz. glass jar.  Collect at least 10 grams or approximately a 4 inch bead of the caulk material.

In most locations and scenarios, Asbestos Containing Material (ACM) is defined as material that contains >1% asbestos of any of the 6 regulated asbestos mineral types (Chrysotile, Amosite, Crocidolite, Anthophyllite, Actinolite and Tremolite).

Caulk containing PCBs at levels > 50 ppm is not authorized for use under the PCB regulations and must be removed. Caulk containing PCBs at levels < 50 ppm may remain in place. PCBs in caulk are known to contaminate adjacent building materials (e.g. masonry, wood, concrete) as well as soil surrounding the building. Therefore, any surrounding building material that is contaminated by > 50 ppm PCB-containing caulk, such as through leaching of PCBs is considered PCB remediation waste and must be cleaned up using 40 CFR § 761.61.  Please note individual state regulations may be more stringent (CT as one example) and should be thoroughly researched prior to interpreting results for compliance.

For asbestos analysis, it is strongly recommended that the sample be first subjected to gravimetric reduction (which includes high temperature ashing and acid reduction) as caulk is a non-friable organically bound (NOB) material.  The organic matrix can coat and obscure the asbestos fibers and without this procedure to remove this organic matrix, there is an increased likelihood of false negative results.  Analysis can be first performed by Polarized Light Microscopy (PLM) following the EPA/600/R-93/116 method.  Furthermore, due to the potential for small asbestos fiber sizes below the resolution of the light microscope, all PLM asbestos results of non-detect to <1% should be further confirmed by Transmission Electron Microscopy (TEM).  Some states in the US (NY as one example) require gravimetric reduction and TEM confirmation for NOB materials, therefore when sampling, one should check with the laboratory to confirm individual state requirements.

For the analysis of caulk for the presence of PCBs, the test method to be utilized is the US EPA SW-846-8082A which is performed by Gas Chromatography using an Electron Capture Detector (ECD).  This method may be used to determine the concentration of polychlorinated biphenyls (PCBs) as Aroclors.  Aroclors are multi-component mixtures. When samples contain more than one Aroclor, a higher level of analyst expertise is required to attain acceptable accuracy levels for qualitative and quantitative analysis. The same is true of Aroclors that have been subjected to environmental degradation (“weathering”) or degradation by treatment technologies. Such weathered multi-component mixtures may have significant differences in peak patterns compared to those of Aroclor standards.  Only experienced and certified laboratories should be utilized for this analysis.  Most states require certification for the analysis of PCBs in caulk, therefore you should check with the laboratory to confirm that they hold the proper state certification for this analysis.

Due to the unique nature of caulk potentially containing both asbestos and PCBs, it was decided to conduct a brief and informal study to investigate this concept more fully.  At EMSL Analytical, Inc., we receive numerous samples of caulk for the analysis of asbestos and PCBs, however we rarely receive requests to perform both asbestos and PCB analysis on the same sample.  I thought this was an important issue that required more study as this concept uniquely applies to the building science industry.  Thirty-one (31) caulk samples were pulled randomly from EMSL’s sample repository in which PCB analysis was already performed.  These samples were then blindly submitted to EMSL’s asbestos laboratory for analysis of asbestos via TEM following gravimetric reduction sample preparation procedures.

Of the thirty-one (31) samples, more than half were positive for PCBs, with fifteen (15) samples (48%) containing concentrations of over 50 parts per million (ppm), which categorizes these samples as regulated and the caulk as an unauthorized use by the US EPA.  Nine (9) of these samples showed PCB results over 10,000 ppm, with the highest result of 92,000 ppm which translates to 9.2% PCB containing caulk.  Fourteen (14) samples were non-detected for PCBs (45%).  All PCB positive samples were found to contain Aroclor – 1254 with one sample containing both Aroclors – 1248 and 1254.

Overall when comparing both results on a sample by sample basis, six (6) of the thirty-one (31) samples analyzed (19%) were found to contain both asbestos and PCBs, eleven (11) were found to contain only PCBs (36%), five (5) samples were found to only contain asbestos (16%) and nine (9) samples were non-detected for both asbestos and PCBs (19%).  Most notably, six (6) of the caulk samples (19% of the samples studied) that did not contain PCBs >50 PPM, were found to contain asbestos with three (3) of those samples having concentrations >1% (ACM).  Assuming the asbestos concentrations of these samples were not previously characterized, this caulk could have been removed without the proper engineering controls to contain potential asbestos fiber release that could contaminate interior occupant spaces as well as the outdoor environment.  Furthermore, there is also potential for worker exposure if this caulk is removed or impacted without proper personal protective equipment (PPE) to safeguard these workers from asbestos fiber exposures.  The removal of ACM without proper notification and by licensed abatement contractors could also result in major regulatory fines and violations.

While this study was not structured as a full scientific study, the results are nonetheless compelling.  These samples were pulled at random and were not biased in their selection.  Since samples were submitted to EMSL blindly, EMSL cannot comment on how and why these caulk samples were collected in the field, other than the fact that they were submitted for the analysis of PCBs.  It is important to note that more than half of the caulk samples analyzed contained PCBs, which is significant from a regulatory, disposal and health impact standpoint.  Most importantly, if caulk is only considered for its PCB content and not its asbestos content prior to being impacted by demolition or renovation activities, potential asbestos fiber releases and exposures could ensue due to the probability that the caulk can also contain asbestos fibers.  Clearly there are liability, regulatory and health risks if caulk is not properly tested for both asbestos and PCBs and treated accordingly.  This study has shown that there is the potential for caulk to contain both asbestos and PCBs and in many cases above regulatory thresholds, therefore proper planning for sampling and testing for both asbestos and PCBs should be considered when performing building inspections and surveys.

Robert J. DeMalo, M.Sc. Rob has worked in the Asbestos, Environmental, Industrial Hygiene and Analytical Laboratory industries for over 29 years.  He has intensely studied and worked with asbestos both in the field and laboratory settings with publications in peer reviewed journals (ASTM).  He has provided analytical research and consultation on method development to numerous Federal and State agencies.  Rob currently sits on the Board of Directors for the Environmental Information Association (EIA) and is a member of the ASTM D22.07 Committee for asbestos.  Rob is a member of AIHA National as well as the AIHA Metro NY, New Jersey and Philadelphia local sections. Rob has provided numerous technical presentations to national and local organizations at conferences and meetings on various topics in his field of expertise.  Rob holds a Bachelor’s degree in Economics from the State University of New York at Stony Brook and a Master of Science degree in Environmental and Occupational Health Science from the City University of New York at Hunter College.